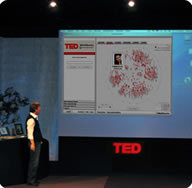 It started appropriately at the invitation-only Technology, Entertainment, and Design (TED) Conference in 2003 as a demonstration of the capabilities of Macromedia’s Flash technology. We wanted to have a better connection to the amazing people that go to TED. Our timing was perfect, as TED had a new owner who had very strong ideas about what makes an interesting conversation that could lead to a longstanding connection. Built in just eight weeks and with the help of TED’s new Curator Chris Anderson and some very talented developers and designers, the first introNetworks community was born, connecting over 1,000 attendees through the company’s breakthrough Visual Matching Engine that instantly created a compelling and intuitive picture of a community so that each member could instantly see all people and information relevant specifically to them. After just four days, 78 percent of the attendees at TED had tried the system at least once and more than 3,000 messages had been sent between them. A resounding success, the story was covered both by Forbes.com and NYTimes.com, setting the stage for the launch of the company as one of the bright stars in the world of social networking. That first network was custom designed specifically for the TED audience. Chris worked directly with us to create an interactive method of collecting profile information that had never been seen before. Chris suggested that while we may have interests, skills and experiences in common with another attendee, the relationship would not last long if we didn’t share common values. We agreed, and that first network captured Values and Passions that were used to provide ideal matches, in addition to interests, skills and experience. Another novel feature of that first network, and something that continues to this day at TED is something called Talk to Me About. In designing the first profile, it became apparent that we couldn’t capture all of the Passions, Values, Interests, Experiences and Skills of the incredibly diverse TED audience. So, we added Talk To Me About, a series of three phrases that each attendee is most passionate about. These phrases were printed on the badge and to this day, they are the single best way to start a conversation at TED with someone new. We have found that the Talk To Me About section of the introNetwork is equally interesting for events, large global organizations, NGO’s, Associations and membership organizations. It’s turned into the ideal ice-breaker. Over the past eleven years, the introNetworks team, led by Kymberlee Weil and Mark Sylvester, has continued to innovate around the company’s base technology, while deploying hundreds of introNetwork Communities across a growing customer base that includes such high-profile companies as Adobe, Aramex, McCann WorldGroup, HP, Harvard, Autodesk, United Way, NASA, Xerox, Socialtext, and Intel. These companies have learned that introNetworks’ Communities are the best way for any organization to transform how they connect with who matters most to them in business, special interest groups or at events. In 2010 the Company expanded beyond its standalone system to provide a component version of the software to companies that want to take advantage of our patented capabilities, yet need something that can be integrated into an application or existing website, rather than a standalone solution. The Visual Matching Engine – Powered by introNetworks OEM Components were launched with its first customer, Socialtext. In 2010 the founders became involved with the TEDx program and launched TEDxAmericanRiviera.com, a Santa Barbara event. Of course, they deployed an introNetwork for the attendees, you can see watch a video of that network in action here. Kymberlee has continued to work within the TEDx Community as a speaker coach, bringing her experience as a producer and attendee at TED to help make sure that her speakers effectively communicate their idea worth spreading. In 2014 the company launched it’s a public/private community project called 805connect. This project is run by introNetworks in collaboration with the Economic Development agencies in the 805 area code (Santa Barbara, Ventura and San Luis Obispo). The company now licenses the technology and consults with entrepreneurs that want to help improve their region’s economic vitality and build a business doing it.

Get your FREE Report HERE

“We partnered with introNetworks to leverage the power of social networking inside our own company and deliver a more globally connected organization. Over a thousand employees signed on in the first three weeks, expressing gratitude for such a human connection.”